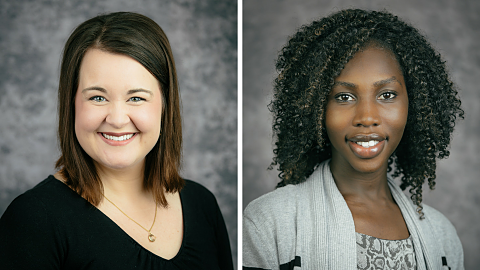 The Williamson County Association of REALTORS® (WCAR) has promoted two staff members in the key areas of professional development and administrative support, according to an announcement by Lisa Wurth, 2017 President of WCAR.  Tracie Dycus has been named Director of Education and Nadreen Bagoun has been named Office Management Assistant.

“Along with many organizations in Williamson County, WCAR is experiencing an exciting time of growth and transition.  With key team members in education and support roles now in place, WCAR is better equipped to provide a higher level of service to members and to increase our engagement in the community,” said Lisa Wurth, President of the Williamson County Association of REALTORS.  “The association’s ability to improve member services and operate more efficiently, especially in a strong market such as Williamson County is experiencing, is vital to our collective success.”

As the Education Director for WCAR, Dycus will focus on accelerating the association’s professional development opportunities for members.  Dycus joined WCAR in June 2016 as office management assistant and was tapped to serve as interim education administrator in September 2016 upon the retirement of Karen Czarnecki, who previously served in the role for 16 years.  The Board of Directors wholeheartedly supported the recommendation to promote Tracie to this new position after her months of hard work and dedication to the interim role.

Prior to WCAR, Dycus held various roles with several Williamson County organizations, including five years as the Marketing and Events Coordinator for Mercy Community Healthcare.  A lifelong resident of Franklin, Tenn., she has been involved with several community organizations, including the Heritage Foundation and A Vintage Affair.  She is a graduate of Middle Tennessee State University.

“It is a thrill to step into a role with WCAR at such a vibrant time for the association and Williamson County,” said Dycus. “Working with WCAR’s leadership to enhance our educational programming for members will be rewarding as they grow professionally from the courses provided here.  The opportunity to be part of a team that contributes to the success of my community is very meaningful to me.”

In the role of Office Management Assistant, Bagoun will support the overall business operations of WCAR.  She joined WCAR in October 2016 in an administrative role on a temporary basis and quickly became a key member of the WCAR team.

Bagoun is originally from Sudan and moved to the United States at the age of 12.  A graduate of Marquette University, she interned and later worked as an administrative assistant for The Marquette University Center for Peacemaking.  Most recently, Bagoun worked for the non-profit Almanar Voluntary Organization in Sudan.

“It is a pleasure to join such a highly professional organization as WCAR and I look forward to contributing to its success,” said Bagoun. “It has already been a lot of fun getting to meet so many WCAR members as they visit the office to take advantage of the many services available here – and as they engage in the volunteer efforts it takes to make the association function so well.”

With more than 2,400 members, the Williamson County Association of REALTORS® provides support and services for area real estate professionals and is the leading voice in the community for its members, as well as residential and commercial property owners. REALTOR® is a registered trademark which may be used only by real estate professionals who are members of the National Association of REALTORS® and subscribe to its strict Code of Ethics.

Other Recent Posts in Press Releases